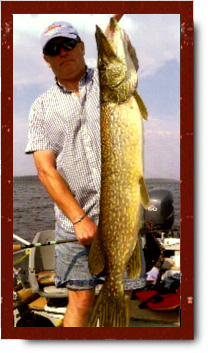 Written by Ole Nygaard from Denmark

The approach to the lodge was picturesque The lake surface was like a mirror, and here out in the middle of The Wild was the Shadd Lake Resort owned and run by Ray McKay, his wife Nancy and a younger brother to Ray, Sam. The resort lived fully up to my expectations, a row of log cabins surrounded by water and forest with a main lodge at the end. Very civilized with shared washrooms and showers a lovely sauna and electricity in all cabins.

At 4 in the morning, I went to the washroom, and at that time the sun was about to break the horizon. I got overwhelmed and sat down to enjoy the sight and the uniqueness of the place. I was not the only one enjoying the sight. Marvin Beatty was up early as well with his pro equipment taking wonderful stills of the sunrise.

After a fabulous breakfast we were teamed up to go fishing. I borrowed a rod at the lodge and bought 1 spoon, 2 dippers and a diver. Lori and I went in Eddie's boat together. At lunchtime all boats met at the shore, where the fish were filleted and cooked in a pan over open fire with beans and potatoes. Lip smacking delicious. For the billions of people who have never tried a shore lunch, words can hardly describe the experience. If we think of the hours of TV time, and the kilometres of newspaper writing wasted on different ways to boil an egg, held against a shore lunch, it is easy to see how fake our world has become. I have eaten all kinds of food all over the world sometimes with a lot of hype (read expensive). Trust me, fresh fish, spuds, beans and a little sauce, easily one star in Michelin.

The next morning was not as brilliant as the day before, but with a few clouds and a slight rain it possessed its own beauty, and it was to be another day on the River. The Churchill River system never ceased to reveal a continuous sensation of awe and admiration of the wilderness.

The second day at lunch we had nice shore stop with more scrumptious freshly caught fish. Slowly, however, we were approaching my finest moment of fishing. Mid afternoon as we slowly made our way back towards camp, we stopped at an inlet using our spoons. My lure was about 15 feet from the boat, and I was thinking of my next cast. Out of nothing came the aggressive sound of line being pulled away from the wheel, and my fishing rod made an impressive arch. The ever observant but quiet Eddie, well, as you know we have got two ears and only one mouth, got a hold of his net, in case I was able to land the monster. On my third try it got alongside the boat, and Eddie scooped the net around the fish and hoisted the thing on board.

It was a pike and rather long. It later measured to 55 inches or ca 1.40 m. I got my picture after the hook was removed. Obviously I was thrilled, but in a way it was not quite fair, that I caught the biggest fish of the week- me with a borrowed rod and a complete amateur. I haven't fished since my kids were little and we holidayed in Sweden, and then I spent most of the time untangling lines and putting worms on hooks. On the other hand, it added to the attraction of the resort, that a fishing dyslectic like me could have this experience. Once back at camp I decided to fire up the sauna, and I had 30 minutes of nice sweating. The second day out on the river had been a little chilly, so it was a nice way to get the old bones warmed up again.

The third full day was fishing again combined with sight seeing. Again plenty of fish, but we were covering several miles of the river system to see rock paintings and The Needle Falls. One of our stops was close to a huge rock that hung on to a steep slope and it has been considered a spiritual place for generations. I could see why. Just a few feet up in the woods there was a solemn tranquil sensation, where you could easily meditate. Everything was as amazing or even more so as the two first days. The falls were not tall perhaps only 8 to 10 feet, but probably one km wide, and it showed the huge amount of fresh water in the river, very impressive. Compared to the huge body of water cascading through the fall, the tiny figure of a moose on a rock painting did not impress by its magnitude but by its profoundness as a connection to forgotten generations. Had someone told me I would eat fish for lunch 3 days in a row, I would have been skeptic. Not so. The third day it was as good as ever.

So from Lori and I thank you for an unforgettable week