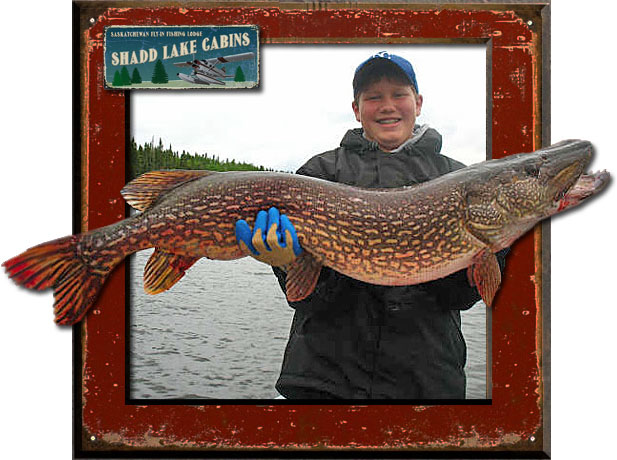 The Churchill River, within boating distance of the lodge, has hundreds of weedy bays with most having rocky points leading into them or narrows between islands and other fertile structure. These are the prime locations for large Trophy Northern Pike. The Churchill River is stuffed with Walleye and small Pike and as a result the large Northern Pike have an endless banquet. The abundance of food allows the Northern Pike to feed freely without expending too much energy thus they grow fast and get big with many Pike having unusually thick girths. This is truly the land of the gators.

Down south, a Northern Pike rarely lives over 10 years. This is because warmer water with neutral acidity is infested with parasites thus Northern Pike usually succumb to disease or parasites absorb so much nutrition that the Pike starves. Once a Northern Pike, which is plagued with parasites, reaches a certain size they cannot eat enough to maintain their weight and as soon as they break that nutrition threshold where they start to become weak, they cannot catch food and they die. It's the exact opposite in Northern Saskatchewan. Our water is slightly acidic due to the coniferous forest. Water in the Churchill River is cooler and much cleaner. As a result, Northern Pike are virtually parasite free and can live for 35 years and grow to unbelievable sizes.

The Churchill River has more than enough food and structure for the Pike. There are also rapids in the main river and many small feeder streams thus giving the Northern Pike endless locations to spawn. This has resulted in a high population of Pike. A Northern Pike's favorite food is smaller Pike so the Pike themselves have their own population control. This lowers the pressure on the Walleye population, which is why the river is still swarming with Walleye.

If you want non-stop action, our guides can take you to weedy bays and weedy open-water plateaus where you can catch hundreds of Northern Pike in the 2 to 5 pound range during a week of fishing. There will be big trophy Pike in these areas so catching Pike after Pike will eventually produce a big one. On average guests catch a few Northern Pike in the 6 to 12-pound range during a week of fishing. If you specifically want to hunt for a 20+ pound Northern Pike, our guides with take you to areas where it's strategically easier for large Pike to ambush prey. This is usually at the mouth of narrows between islands, off rocky points leading into shallow bays that have a feeder stream, narrow sections of the river where there is current or in areas where there is a high population of small Pike and Walleyes. Monster Northern Pike are very territorial so the most strategic ambush areas will produce the biggest fish. Since our guides and guests practice catch-&-release, we know the big Trophy Pike are still there and remain there until chased off by a bigger Pike.

The Churchill River is 1000 miles long and big Trophy Northern Pike do abandon their territory once in a while and migrate up and down the river. There is no telling what the potential size of a Northern Pike can get to with this much water to roam. We practice catch-&-release of all Northern Pike over 6 pounds. Guests catch a number of 20+ lb Northerns during the season. Once in a while guests catch truly magnificent Pike that exceed 30 pounds. Pike that large are old and smart. As a result, a Northern Pike in the 30-pound range is very rare and we do not want you to think you will catch a Pike that big but they have been caught and there is always that chance. Needless to say, if you enjoy Pike fishing, you will love it hear at Shadd Lake Cabins. Our Pike fishing is just as good as any other place in Northern Saskatchewan that claims to have the best Pike fishing in Canada.